Beauty, Luxury, Privacy – of all the places in the world that cater to well-off skiers (Aspen, Lech, St Moritz), Courchevel is the most famous. Located in the French Alps, the Three Valleys combine ideal geography to form the largest ski.

Beauty, Luxury, Privacy – of all the places in the world that cater to well-off skiers (Aspen, Lech, St Moritz), Courchevel is the most famous. Located in the French Alps, the Three Valleys combine ideal geography to form the largest ski area in the world, with 150km of alpine ski runs from beginner-friendly, to some of the world’s most challenging slopes. Courchevel caters not just to skiers, but also other winter sports such as snowboarding and more adventurous options like heli-skiing. Its glittering pistes, stunning scenery and treeline skiing are just some of its alluring features – added to its spectacular range of luxury chalets, bars, restaurants, boutiques and nightlife. Anyone can see why Courchevel is so desired.

In the height of ski season celebrities, royals and the super-rich can be spotted enjoying the skiing pistes during the day and the prestige of Michelin star dining in the evening. Some of the most famous faces include Leonardo Di Caprio, David and Victoria Beckham, Roman Abramovich, Robbie Williams and the British Royals the Duke and Duchess of Cambridge. ONE Authentic Properties is proud to have not one, but two luxury properties in this exclusive and luxurious snowy paradise: Le Blanchot and Le Coquelicot.

Before it became a playground for the affluent, Courchevels name originated from the hamlet of the same name and refers also to the surrounding towns, such as La Plaz 1350/1550/1650/1850 Courchevel 1650 (Moriond) and Courchevel 1850, which are given numbers due to the altitude in metres. The luxurious ski resort competes directly with Val d’Isere.

Couchevel was initially planned in 1942, during World War II under the Vichy government and the project was handed to the architect and town planner Laurent Chappis. A keen skier, Chappis construction of Courchevel began in the post-war reconstruction and was the first resort in France that was in its own self-sustained, rather than being constructed around an existing town. Thus, the first ski lift was installed and the first blueprint for the modern ski resort was materialised.

Before 1964, Courchevel was built following the popular brutalist style of architecture. This design was changed to reflect a more escapist and traditional architecture that would reflect the forest and mountain surroundings. Courchevel grew in popularity, in particular with Russian clientele, and became attractive to wealthy people from all around the world.

Today, Courchevel has no shortage of leisure activities; With over 100 boutiques, plenty of nightclubs, the largest European waterpark in the mountains, climbing and a plethora of restaurants including five 2 Michelin star restaurants, Courchevel truly is the winter paradise to see and be seen. 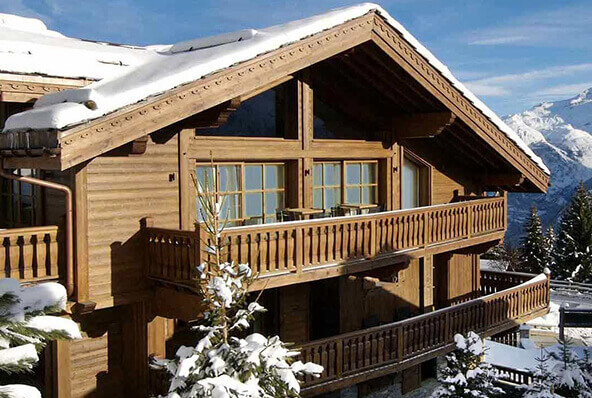 Our Luxury villa Le Blanchot, is a jewel in the portfolio of ONE Authentic Properties situated in 1850 Courchevel. A place of unparalleled comfort and luxury, this property’s standout feature is a crafted wrought-iron staircase that connects each floor. With 6 bedrooms and 6 en-suite bathrooms,  jacuzzi, massage and steam room, a ski room, private butler and more; Le Coquelicot is a first-class choice for filming and photoshoots in the snow-covered French Alps.

The other side of Courchevel

Although Courchevel prides itself in exclusivity, it is no stranger to the outside world.

The Courchevel valley is regularly involved in sporting events and built the town of La Tania to host the 1992 Winter Olympics and in 2018, Courchevel was made a joint host of the 2023 Alpine Ski World Championships; the first time France has held the competition since 2009. Courchevel also regularly hosts the yearly Ski Jumping Grand Prix is part of the Tour de France, with stages 17 and 18 coming through Meribel. The event is scheduled to continue this year and Courchevel also hosts other sporting events, such as triathlons and mountain biking.

Courchevel hosts the International Fireworks Festival from February to March. Each year the event attracts over 8,000 spectators that come together, mulled wine in hand, and marvel at the worldwide pyrotechnics artists who compete in this unique competition. The stunning views of the snowy French Alps and some of the worlds most memorable fireworks display light up Courchevel and create a magical atmosphere.

Surrounded by magical mountain surroundings, Chalet Le Coquelicot is one of ONE Authentic Properties’ most exciting villas. With snow-inspired textures, spectacular views and a roof garden, this villa exudes luxury and prestige. A place of true comfort, the splendid spa, steam room, jacuzzi and massage rooms are sure to relax you after a long day of filming or shooting. Le Coquelicot provides 6 bedrooms and en-suite bathrooms, a Ski room, a concierge and more.